Glorious weather and double bank holidays made the four day Easter bank holiday weekend a real treat… Making the most of the sunshine, NFCC members were out in force and some escaped to various events too.

First up, Tuesday evening saw the first running of a NFCC Road Bikes Only time trial on the P311/10 course in Ringwood – with 21 riders, it was the most successful club TT for a few years… A full report can be found here and images are in the gallery. 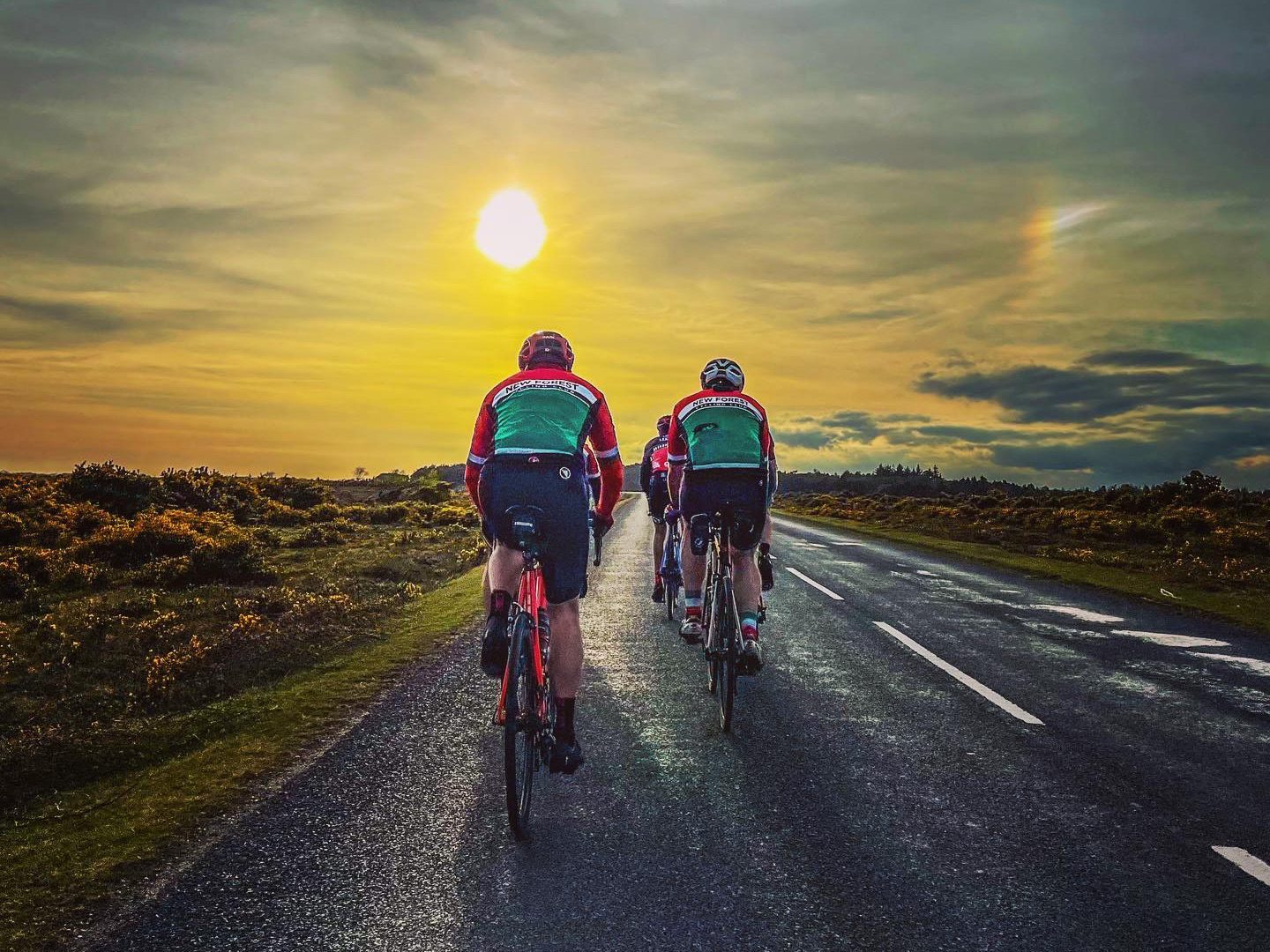 Thursday evening chain gang was a successful test of a new course:

Another week and another new course. This time we made 3 laps of an out and back course between Roundhill campsite and Hatchet Pond on the B3055. Although the route was flat a stiff wind made it very different on the westerly legs. Seven riders showed up for the ride, so it was just one group this week. By the 5th leg the group was split and a second group formed and rode a slightly slower pace. Congratulations to the latest member of the Chain Gang, Justin, who joined for the first time, rode the drill with skill and was still there at the end.
Probably back to the usual course next week, we’ll do a test ride before making any announcements so please keep an eye on the usual sites for final information.

After testing their legs on P311/10 on their road bikes on Tuesday Evening, Jonathan Chadwick and Bob Jolliffe raced the Bournemouth Arrow Good Friday 10 on the same course.  Chadwick finished with a time of 24:19 – finishing in 13th place overall – a full 2 minutes quicker than on his road bike 3 days earlier. Jolliffe crossed the line in 30:07 – nearly four and a half minutes quicker than earlier in the week! Full results can be found here. 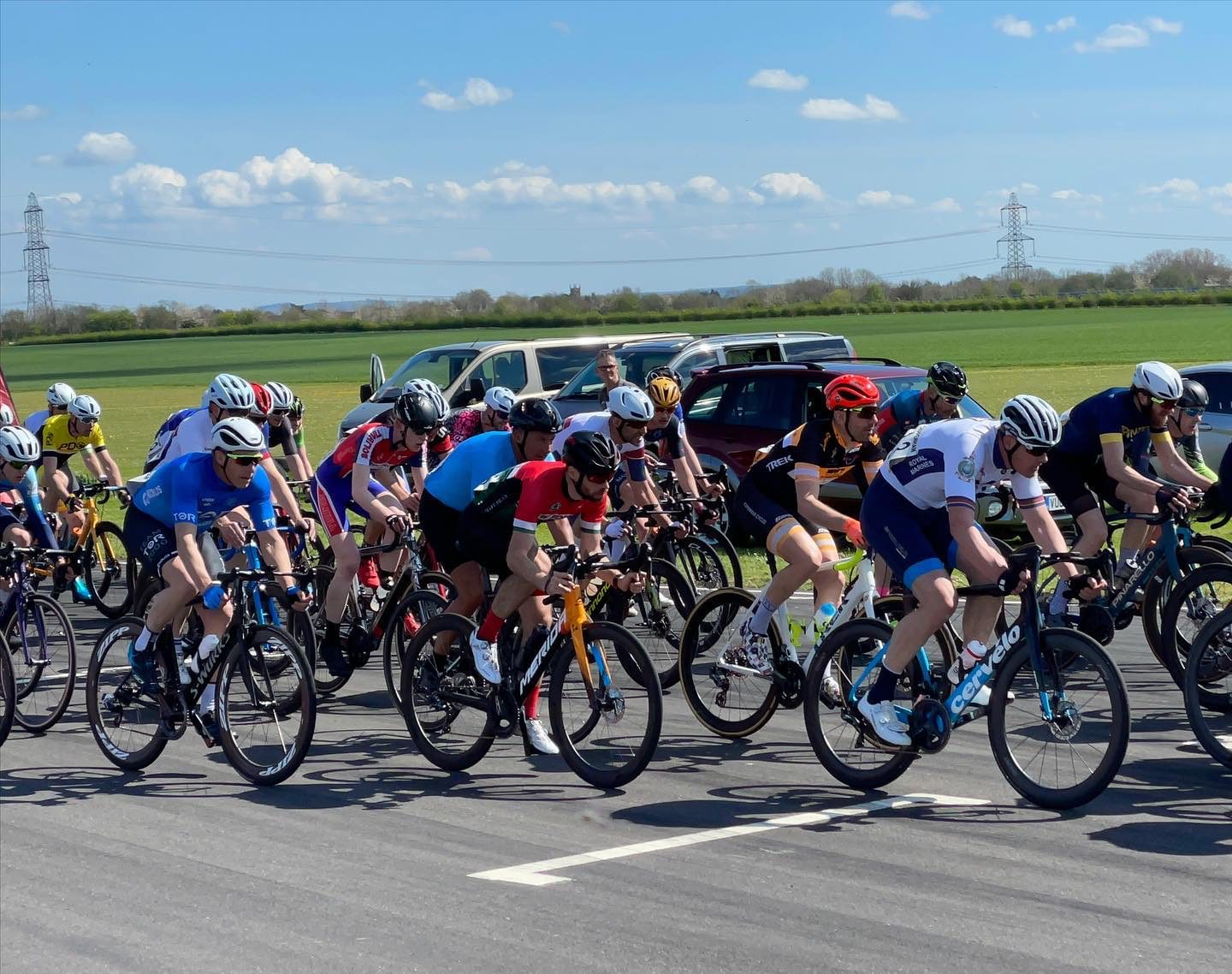 Phill Brown flew under the radar once again to stretch his legs at the Good Friday Easter Classic at Castle Coombe in Wiltshire, flawlessly hosted by Chippenham Wheelers.

A day of firsts for me… My first time on a traditional race track, first time in Cat3 and first time riding a bunch of 100 riders… yep, you thought some of the club rides could be hectic, this turned cycling into a full contact sport. Unfortunately, first time out of the points in a crit race for me too!
The enormous field of riders was seriously impressive, thrown together from a bunch of fresh upgrades like me, seasoned riders just hunting those elusive points to return to Cat2, and even those that turn up with a full team, just to play their cards. The start was pretty intimidating with 100 bodies all trying to be the first person to kiss the apex of the first corner, and that energy didn’t subside for the whole race – it was a constant game of cat and mouse. As soon as the break away was caught, the next attack was fired off thanks to all the fresh legs in the peloton.
I found myself getting caught in the wind far too often, probably from a lack of racing experience, but enjoyed every second of the adrenalin filled race, averaging a whopping 44.3kmh (27.5mph). Closing my winning streak, I crossed the line 13th out of 100 in the final bunch sprint. Regardless of the final positions, invaluable lessons were provided by the experienced riders around me and I can’t wait to get the next one booked… 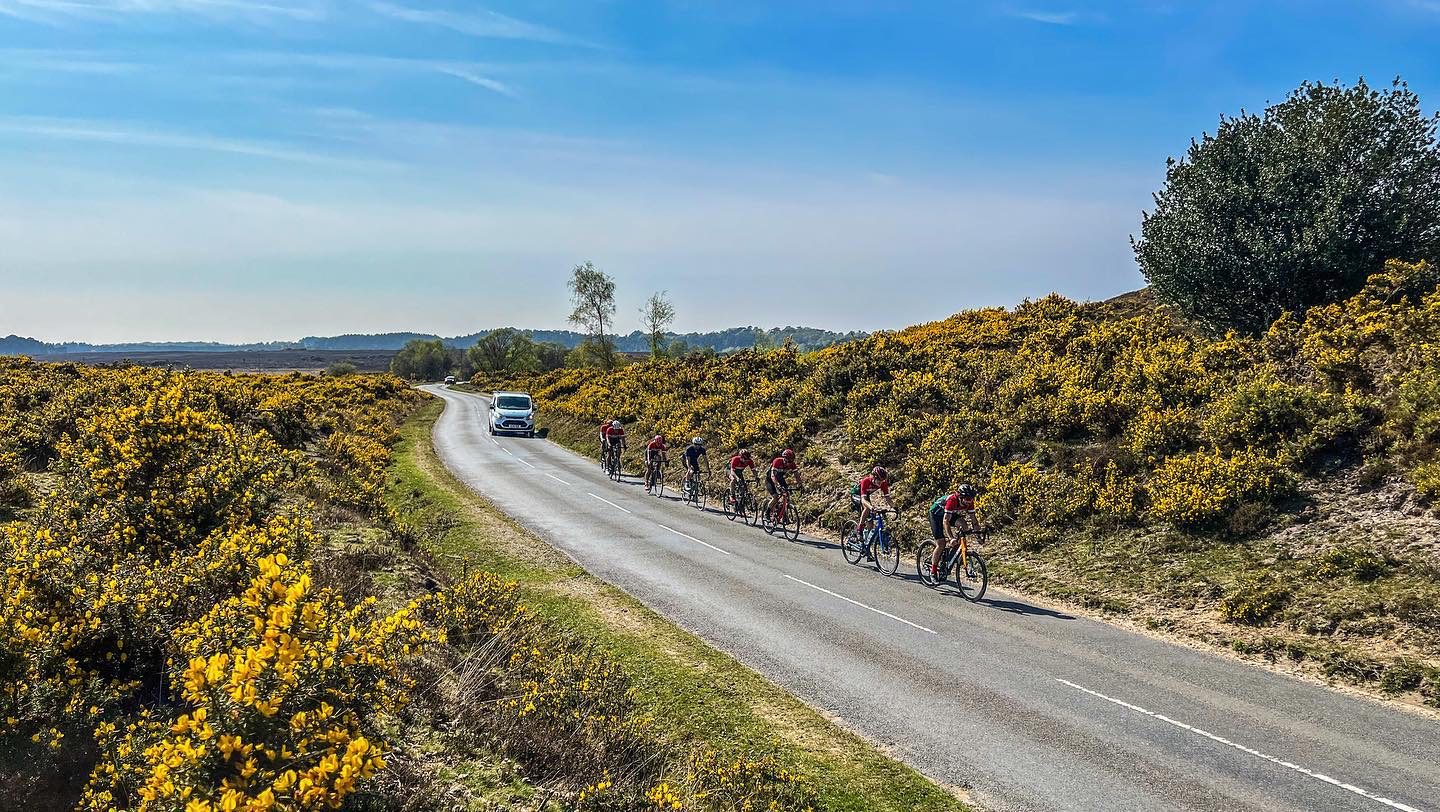 All the usual suspects were on the road for the Saturday Club Ride:

With the good weather forecast and the expected influx of tourists to the forest this weekend the club ride went out of the forest and along the Chalke Valley to Shaftsbury to avoid the crowds. This proved successful as the traffic was pleasantly light for most of the ride. The core ride was 142Km and quite hilly, but most riders took it over 161Km for a century and one, Phill Brown naturally, took it to extreme lengths and made it up to 222Km. Seventeen riders were at the start, so we split into two pelotons, we picked up another three en route so a further split into three groups was made. We all regrouped at the Broad Chalke Community Shop for coffee and then headed up the Chalke Valley and onto the dreaded Zig Zag Hill. This is a much better climb now it has been re-surfaced and will be used in the Tour of Britain in September. With most of the hard climbing done the groups headed to Ringwood for another coffee stop and a very warm welcome at Café Velo. Suitably refreshed the ride continued back to Brock with riders gradually peeling off for their return home.

A group enjoyed the Sunday club ride but it seems they all forgot their cameras and notebooks… Don’t forget to jot down a few words, snap a few photos and send them over to press@newforestcc.co.uk if you find yourself out representing the Club.

Congratulations to those that braved the conditions for the first post lockdown... read more 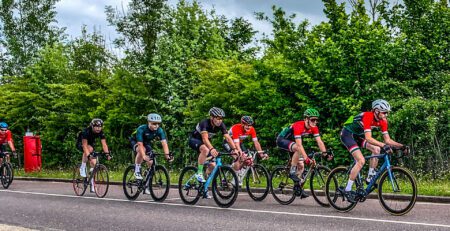 The cyclocross skills session is going to be held on Tuesday 24th... read more

SUNDAY CLUB RIDE CANCELLEDApologies for the late notice but I was hoping... read more