Aron Kelly and Barry Hards took advantage of the return to racing at the BJW 10 on the P311 on Tuesday. Aron was narrowly beaten by 6 seconds posting a time of 21.31, and giving an indication of his form after his focus on TTs this year after signing up with a coach. Barry Hards also raced, posting a good time on the day of 24.07.

Gary Lock represented the NFCC on Thursday at the Bournemouth Arrow event with a time of 24.45. Gary had probably done a 100 mile training ride the day before and a long run on race morning!

On Sunday Aron Kelly raced a Newbury event, scheduled to be a 15 but revised to a 10 due to road works. He was pleased with a time of 21.12.

As the season gets at least partly under way, please send your results to press@newforestcc.co.uk and I’ll include them in a weekly round-up. 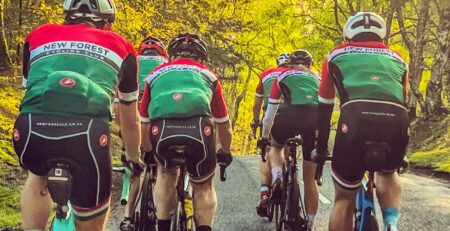 As the weeks finally start to feel like they are slowly rolling... read more

Unfortunately the weather forecast for Monday gives us a risk of ice... read more

Weather forecast is much better than last week so it’s back to... read more

Training Camp 2023?Now that the dust has settled on the clubs first... read more

Weather forecast for Saturday is for high winds (40MPH +) which makes... read more

It was back to business as usual for the Club for the... read more