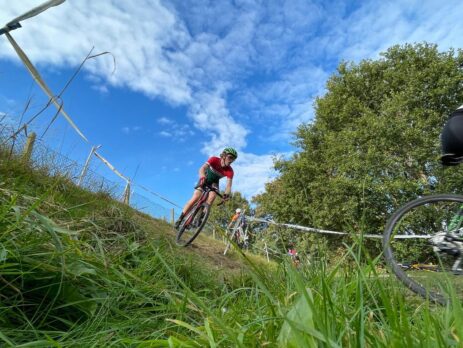 A total of 6 NFCC Jerseys were on show at round 5 of the Miche Wessex CX League; Joe Shepherd, Emma Clayton, Catherine Pascoe, Matthew Knight, Jonathan Chadwick and Ian Macdonald all pulling on the Red White and green.
Having previously been used for the British Nationals, the course was a classic; a mixture of technical sections, an off camber traverse, a crossing of the dirt jumps more suited to mountain bikes, power climbs and flowing corners, all kicking off with a full gas sprint around the perimeter of a cricket pitch as a start lap.
Matt was the first rider off in the Vet 40s and finished 52nd out of 67, a solid performance on what was a tough day out. Emma and Catherine both had strong races stringing together some excellent laps, with some impressive technical riding. Catherine finally rode to her full potential after being disappointed with her result thus far, climbing onto the podium to finish 2nd in the V50 field. Emma had a great race for the first time on a proper cyclocross bike and finished 8th in the senior field, despite an off on the tricky off-camber section.
Next up were the Vet 50 men with Jon and Ian (a regular race commisaire) flying the NFCC flag. After being positioned towards the back of the field on the start grid, both men spent the race picking off riders and gaining places. Ian finished 50th and after a few offs, Jon finished 56th in what was a very large field of 78 starters.
The senior race started fast and Joe pushed hard to try and maintain position mid-pack, unfortunately attending an unscheduled appointment with the ground on his third lap. He fought a difficult battle from then on, sadly dropping further and further through the pack. He put in a big push on the final lap to claw his way up to 34th out of 54 starters.
Despite the bumps and bruises, everyone seemed to enjoy the weekend and what was possibly the final dry race of the year. With rain on the forecast, the next round hosted by Andover Wheelers at Redenham park promises to be a somewhat softer landing.

A number of NFCC riders took part in the 3rd round of... read more